Day two also began early. I was not sure exactly where I was meeting “the guys”, and I did not want them waiting for me, so I resolved to be first there. So I left Super 8 at 6 AM and went to a McDonalds- a combo McD’s and 7-11 if you can believe that. All the better because I generally hate the McDonalds OJ and their coffee is undrinkable, so I had options.

I drove up to Virgin, and then took a side road up to an alternate entrance to Zion (one with no guard shack!). I drove and I drove, and I got to thinking I missed it or something…. And then I found the Left Fork trail head. I parked, and there were already a few folks there. Everyone is ready for adventure, and super friendly. I arrived about 7 AM, and we are to meet at 7:30, so all is good. 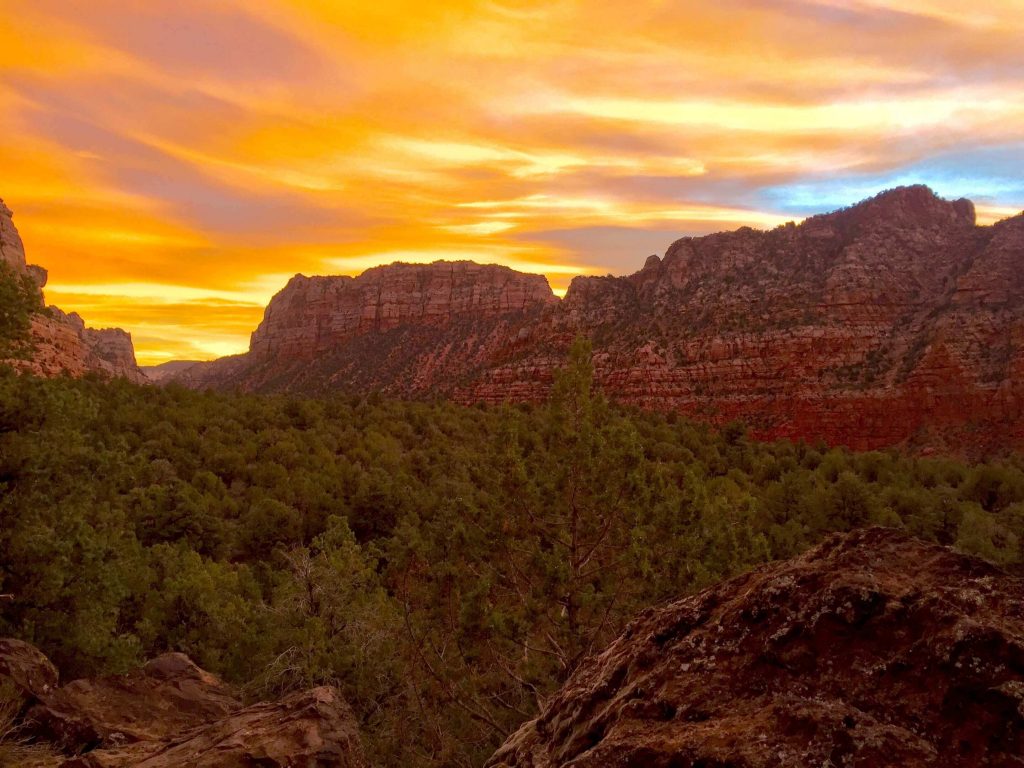 I am looking out my car window, and I just see red. LOTS of red. I get out, and as luck would have it, I have a camera. Or three. So I just start shooting.

There is no way to describe this sky. Normally, a sunrise is in the East, maybe the eastern third of the sky. This sunrise went horizon to horizon, as far as the eye could see. Nestled in red rocks already, the color saturation was well above what I had ever seen- I had to tone it down for my pictures because the reality looked too surreal. I keep shooting, all the while thinking I am here to meet other photographers, and they are missing this! They have to be kicking themselves (Ryan later told me he saw it from the Maverick in La Verkin, and he was just crying). 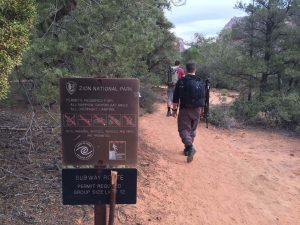 It turns out that one of us will not be going- he got called into a fire burning just south of Cedar City. So it is just Ryan Smith, Ryan Moyer and myself. We all get together, get packs on, boots laced up and water cans full… and off we go. The first half-mile is no sweat. Then you get the drop. A few hundred feet nearly straight down. This would be double black if you skied it. Not too bad going down, but all the while you know you have to come back up. 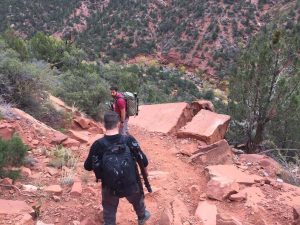 Once we get down to the river, you just fall in love. This is one of the most consistently gorgeous trails I have ever hiked. Every corner is a new experience and a new scene. Because we are so far down a narrow canyon, the direct sun never really hits us. A lot of the hike is up the river, and that is cold. We have neoprene socks (which are a must, I would say). Waterfalls abound, as do large pools of perfectly still water. We see trout. I keep wanting to stop and shoot… and Ryan reminds me it just gets better the further up we go. We also start collecting colored leaves to augment some of the pictures we will take.

At about three hours into the hike, we reach some falls that are just incredible. Ryan Moyer- the only one of us to have done this trail before- says his first time it fooled him, too. Though it looks like Archangel Falls, it is not. The good news, the falls we want are only another half hour further. 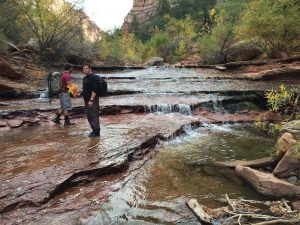 In the blink of an eye, we are there. Archangel Falls are well deeper than I thought- probably a couple hundred feet deep. They are in three layers. And they are captivating. I think we must have spent an hour shooting there… you shoot from here, and you see another shot there. The views are endless.

Just above Archangel Falls, you can tell we are nearing The Subway. To the right, a giant hollow is carved into the cliff. And if you look up and to the left, you can see two half-tubes in the cliff face, one above the other. But we are not to the Subway yet!

First we stop at the crack in the rock. The whole river flows through this crack. At speed. It is fascinating to see what the Grand Canyon probably looked like 40 million years ago. Needless to say, the simple things- like a singular crack- take the longest to set up for. We spent some time here, but our efforts I think paid off. I really like Ryan Smith’s leaf pictures, and Moyer actually found a new angle that really showed off the crack.

Climbing up the rock the crack is in was an achievement in itself. With water continually flowing over it, this one rock that spans the canyon floor and must be 200 feet long is slimy and slippery. Word. We get above it, and around the corner… 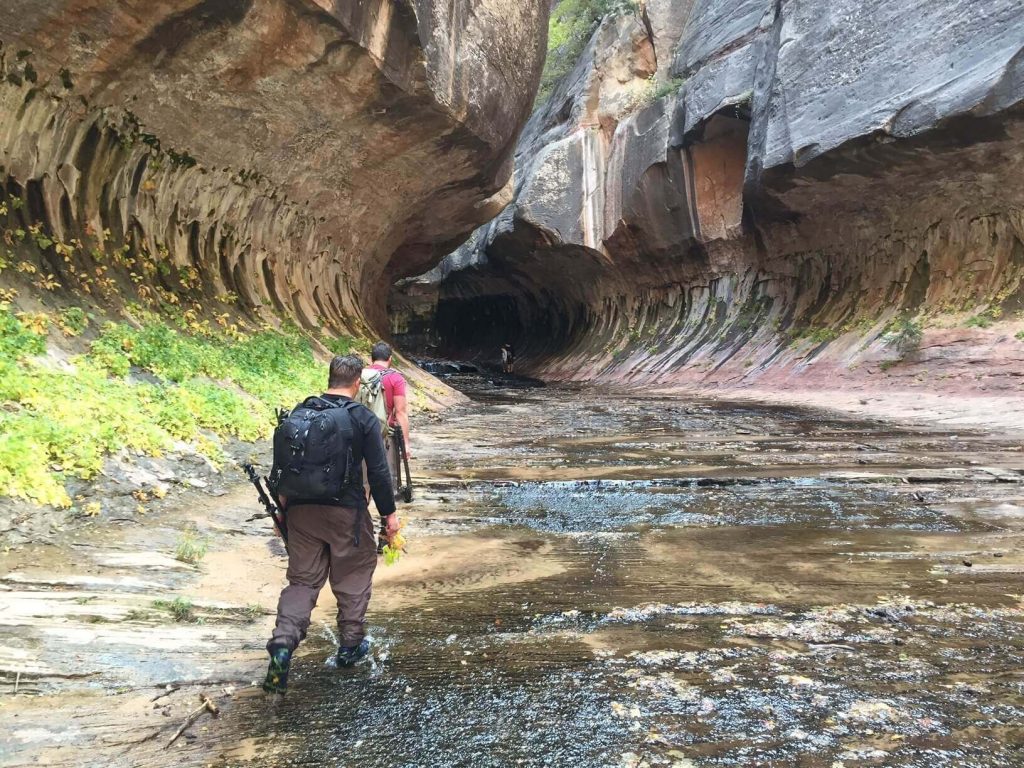 OK, I had built this place up in my head… maybe too far beyond what reality would be. But it, like Paris, did not let me down. It was everything I had hoped for and more. It is a natural wonder. I think I must have been tired from the hike, because it took a minute or five for the magic of the Subway to creep into my soul. But it did, the Subway is now a part of me. My words, and my pictures cannot do this wondrous little slot canyon justice. It is a one-of-a-kind place. Every color in the world is in there. It glows. It is sublime. 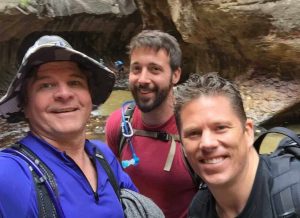 Ryan Smith had one shot in mind. Only one. It took him an hour to get it, but he got something special. He jumped in one of the pools, and shot from in there- no small achievement when the water is this cold. I played it safe and shot the standard shots from the upper left.

I shot wide shots, with an ND and low ISO so I could blur the water. As I recall, it was probably in the 1-2 second range, at f 22 or so. I switched to a “normal” lens of 35mm to reduce distortion, and then I shot some panoramas. At probably 15 feet wide, there is not a whole lot of room to move for shots, so that is why everything looks so similar. 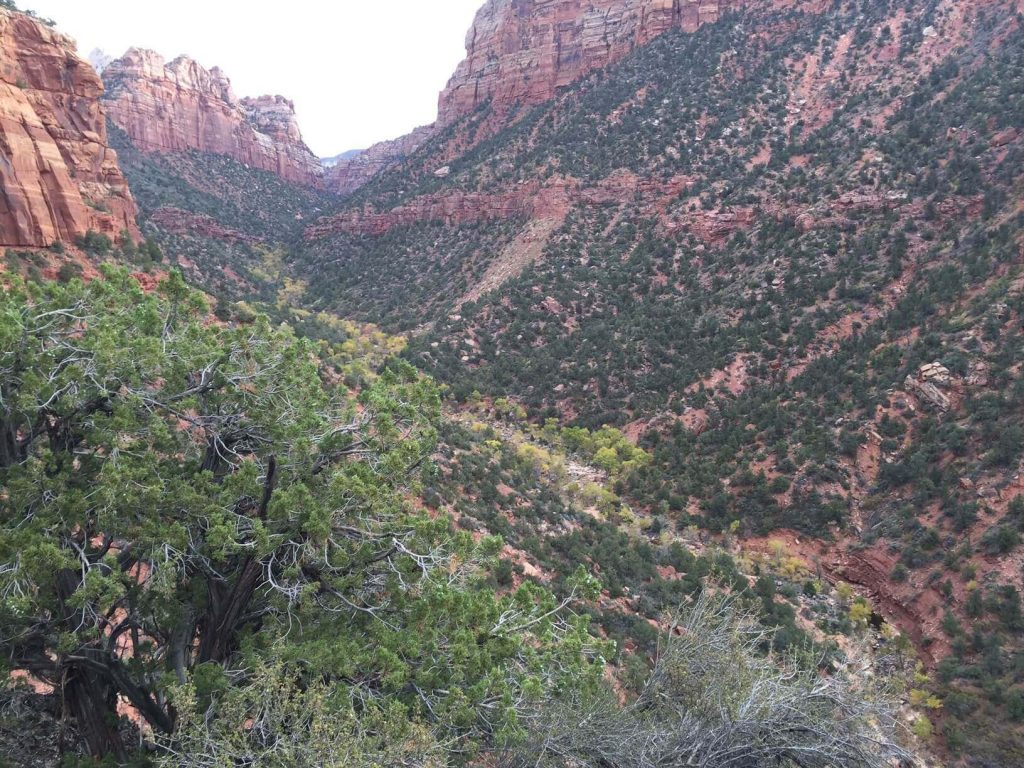 The hike out was long, and not a lot was said. We did what we came to do, now there was no real payoff for our efforts. But onward, and then upward we trudged. We got back to the tops of the cliff by about 6:30, and I decided to drive like a madman for Salt Lake. So another 12 hour day in Zions, and a total of 19 miles and 175 stories climbed.

Now that I look back, there are some other shots I wish I had taken. And I will. Because even after the grueling hike back, and the pain of the assent, we all agreed we had to return. No question. So in January we will put in for a permit for April. And back again next October. Because the Subway is not just a single stop…