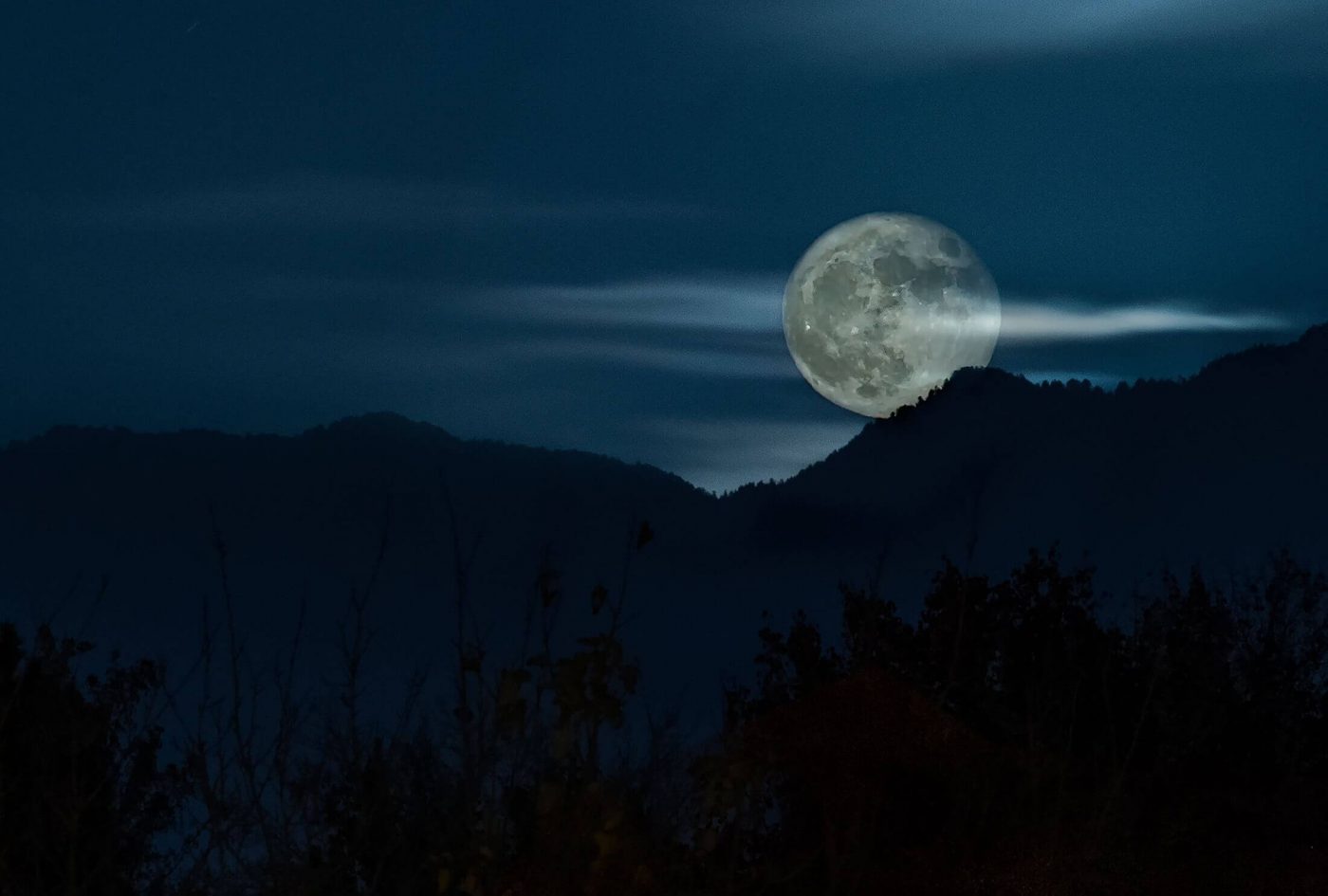 Sunday and Monday nights treated us to the largest moon on 70 years. And the brightest. Challenge accepted Moon!

I wanted to be well back from the Wasatch. I wanted the angle when the moon first appeared to be as shallow as possible, because the moon would be even bigger. To get that shallow angle, you gotta back up from these monsters we call the Wasatch Front. Sure, they are beautiful to look at, but they take up 10-20 degrees of horizon. So I decide to try from Antelope Island out in the Salt Lake. And Tori wants to go, too. So I grab my D500 and let her have the D300s. I have the 70-200 2.8, and she gets the 18-200.

We see a couple fun things on the way out, so we stop and shoot. What I really want is a perch from which I can get the sunset (5:01pm) and moonrise (5:04pm). As you can see, not much room to scramble from one shooting location to another, so if I can get to a ridgeline or peak on the island, I am golden; just swing the camera around. 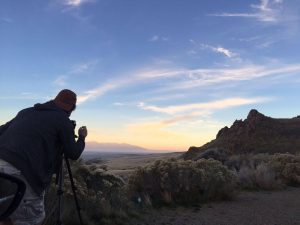 Unfortunately, such a perch can only be gotten to after a 1-2 hour hike. And since it’s already 4:30, it ain’t gonna happen. But we do find an ideal vista for the moonrise on the east side of the island, about 200 feet up from the lake.

If I wanted you to take away anything from this, it would be that you should be ready to accept the opposite of what you expect. I went out to shoot the moon; my favorite shot from this excursion is of the sun. You might think you have to face the sun to get a great sunset but sometimes the best sunsets are facing east.

And such was the case Sunday. The effects of the setting sun on the Wasatch mountains, and on the clouds in the east was far more compelling than the sun burning a hole into the haze in the west. When you want to make something different and new, think opposites. You will be surprised. 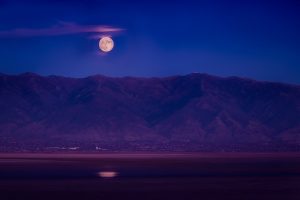 Though scheduled to pop up at 5:04, we did not see the moon until about 5:35. This despite increasing our angle on the horizon and reducing the apparent height of the mountains by moving out to the middle of the lake. To make the picture work, I had to combine two exposures, one of the foreground and one of the moon. I found the Supermoon- at its 14% increased superbrightness- to be about 2 ½ stops brighter. Far too wide a contrast range to get in one picture… or even two. After shooting with the 70-200, I noticed a reflection on the lake, but my zoom was still too narrow at the wide end to get the reflection AND the moon. So I switched with Tori and used the 18-200 at about the 30mm point to get the full framing I wanted.

Another note about shooting the moon. Unless you are spot metering, you are never going to get your camera to meter the moon correctly- and even then you are going to need to use exposure compensation. For the moon, you have to chimp. I stop down until the dark areas are readily visible and call it good. For me, on this shot, I was shooting -3.7 exposure comp for the moon exposure.

My surprise of the night? Tori ALSO got really good exposures. I did not prime her, or tell her to go manual or anything. She figured it out on her own… and got the correct exposure. Good job Tori!

Monday, getting ready to go to ballet, and I notice it’s getting dark. Oh poop- SUPERMOON! So I tell Tori she’s a gonna be late for ballet, and I drive up the street to a bridge that will give me enough elevation I can get a clear shot of the mountains- only a quarter mile away. I park and haul out my gear. Moonrise is supposed to be 5:43, and ballet is like 6:30, so MAYBE we can make it. 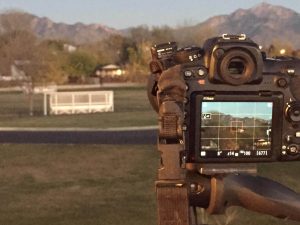 But I’m closer to the mountains now, so the moon will rise even later. The mountains have an awesome profile, the houses in the foreground are pretty- some even with Christmas lights up!- and I am just feeling real good about getting something spectacular. I shoot a series of foreground exposures, getting ready for the main event…. And someone is walking up to me. Turns out my wife was driving home, and saw this lunatic (and I use that term intentionally when shooting the Supermoon!) by the side of the road. Who could that weirdo be she thinks and then answers her own question when she realizes it is her own husband.

We hang out another ten minutes or so, and the moon hits. It is even more incredible than Sunday- so big. And wispy clouds- who could ask for more!

I knew right away I had a good image, so I edited the picture at ballet. But it wasn’t until the next day that I realized the cool foreground wasn’t needed. A tighter crop sold this image.