Well I had quite the fun shoot the other night. I always enjoy shooting ballet, and when you get the chance to work with a few young women from Ballet West Academy, it’s just that much better. These were some shots for our friends line of dancewear, and so we were pretty open as to what to shoot- a lot of freedom there. So Ronda and I thought about it, and it being mid-January, we felt on the street stuff might be too much for the girls, no matter how professional they are. We settled on renting a studio space downtown, and I could not have been happier. 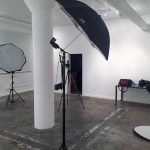 So the first cool thing is I have never rented a studio space before. I was so excited to have my own working studio, if only for two hours. And the place had such character- bricks and raw concrete floors. It instantly got my creative juices flowing.

When the girls got there, they were just as excited. One big plus of the studio was they had their own room to change it- I am sure they appreciated that. We got right to business, and really had a great time.

I used a lot of soft light. I used soft boxes to wrap the light around the girls. With all the white walls, we got a lot of reflected light, too. I had originally thought to do High Key, but I did not like that look for this project, so I kept to the softer light.I think that was the right choice. 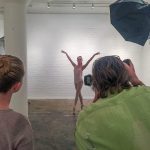 We shot for about two hours, and got a few hundred great pictures. Most were shot vertical, so we could see the whole body and how the leotards fit- that was the object of this shoot!

About half-way through, I pulled out some colored gels for the flash. The white walls made changing the mood very easy.

When all as done, everyone was tired but happy. We all got exactly what we needed, and Ronda was giddy with all the pictures. I really hope to work with these young women again- they were extremely talented, and extremely professional.