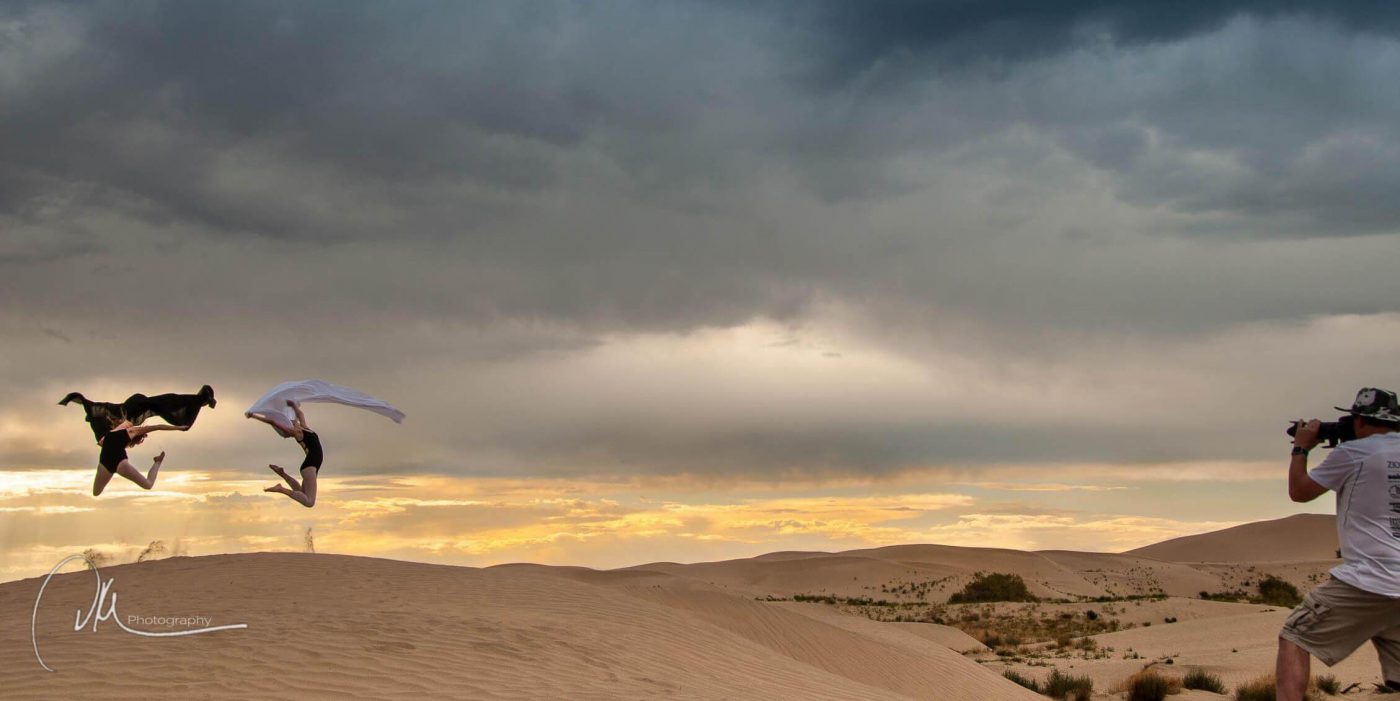 Original concept for this shoot was twins. Two girls with remarkably similar hair. Remarkably long legs. Incredibly slender physiques. And luckily for me, they get along. So the plan was to shoot them doing remarkably similar things… or totally opposite things. But shoot them together. For a location we chose a State Park just an hour or so south, a place called Little Sahara. Because of the endless dunes of sand. And that was great…. until the wind picked up. But I am getting ahead of our story here. We started out on a ghost town hunt.

I found 3-4 ghost towns on, or rather, just off the route we were taking down to Little Sahara. Never trust the Internet. While I knew where these were all supposed to be, we couldn’t find any of them. We maybe found one, but it wasn’t a ghost town anymore, so it hardly suited our purposes. 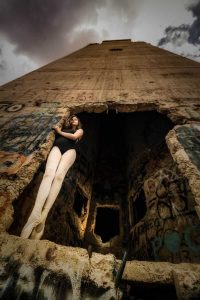 What we did find made up for it- a tall cement grain silo, long fallen into disrepair. And long the target of taggers. It made a great first stop, and a great place to warm up to Mickenzie. This was her first outing with us. She fit right in- looking for adventure out in the field, and always willing to try something more. A lot of my shooting philosophy is to let the scene dictate the shot, or maybe more appropriately, don’t over-plan; go with the flow. I think I do the best work when I don’t force it, and just feel it. Mickenzie was on board, and helped us find some wonderful shots in the field.

As you can see, we were fighting the weather on this shoot. Middle of summer, the whole last week in the 100’s, and we get a day with in and out monsoons. No way we’re gonna get close to what we thought… so we get what we can. I put the girls in black hole, si I can effectively light them- one flash on a tall c-stand to camera right, and a second pocket flash accent lighting in the cave. Sometimes a back light, sometimes an atmosphere light. From hot and sweaty to dark and gritty…

From here, we made it to Eureka, which is a wonderful small town with a lot of great nooks and crannies we wanted to shoot in. Unfortunately, we got just hit with an icy rain there, and while we were able to get a couple shots, it was just too cold for any of us to want to stay long. So we headed down the road to the dunes. 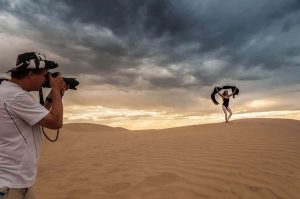 Strangely, middle of summer, Saturday afternoon, and there is no one at the state park! Not even a ranger to take our fee (I paid in an envelope on the honor system). Stormy skies can make for moody pictures, so that’s where we decided to head. We drove right up to a giant dune and started climbing with the gear. I started with each of the young women, one at a time. We brought out the gauze flags, because we had a great wind. I was hoping for wind- I had the girls kink up their hair and leave it down. That worked REALLY well!

Sometimes the best part of a picture is not what is seen, but what is implied. What the viewer puts adds. As a photographer, I take you there, but you can’t help but adding your own bit. That’s why I love this one- I call it, Joy. That’s what I see- someone having the greatest time on their own. As the saying goes, Dance Like No One Is Watching. That’s what I see in this. That, and someone experiencing the pure joy of selfless dance. It does not matter we can’t see her face, in fact that adds to the image. It’s OK to break the rules… but you have to know the rules. When you understand them, you know when to break them. 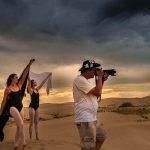 As the sun fell, I finally got the two of them out together. Unfortunately, that is also when the wind decided to pick up. It came out of nowhere, and it came fast and hard. We started to try and shoot through it, but then is started raining. Rain. Sand. Cold. Too much. We all felt we had something good in the can, so we packed it up.

Lesson of this shoot- do NOT fight the sand. We (and by we I mean me) had to spend a lot of time cleaning the sand out of EVERYTHING. It would have been find just shooting, but the wind drove the sand deep in everything. One lens is going back to Nikon for refurb.