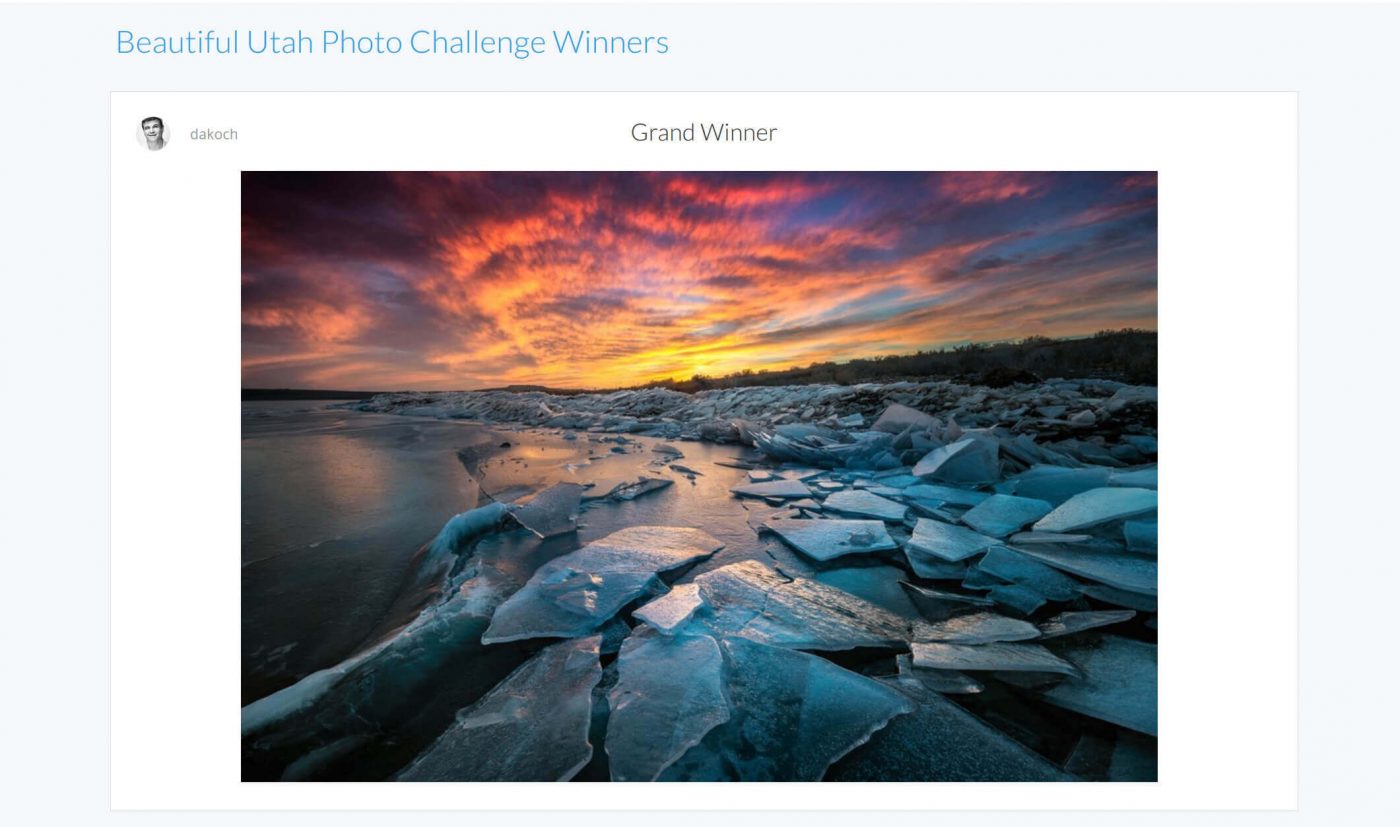 One of my favorite pictures from last year just won it’s first online award. Ice Floe- a shot I made just before Christmas at the end of 2016- was just chosen as the Grand Winner of the Beautiful Utah Photo Challenge on ViewBug. As I looked over the images in competition, I see a lot of really well-made images. Utah is swollen with great places to shoot, and overflowing with those willing to shoot them. So to be picked out of all these wonderful images is an honor for me.

There is a causeway across the lake over to Antelope Island. It closes off that portion of the lake, and catches the ice flow. The ice piles up against the causeway, and this phenomenon is the result.

The week before Christmas, my good friend and extremely talented photographer Ryan Smith (LifeScapes West) shot this image; I believe on Monday. It blew up on social media, and was used on the local nightly news. And it sure as anything grabbed my attention. The image is beautifully framed and exposed, and is one of the more compelling images I have seen all year. The lines pull you in, and the color is just incredible. So I felt I had to do my own version of it.

So the next day, I raced from work to the causeway to get a version of the image. Its almost dead-center mid-winter, so sunset is early. 5:10 as I recall. So I did not have a lot of time to get there and set up; I pretty well had to hit the ground shooting. 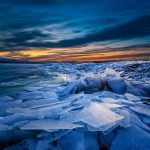 This was the first image I got. From Tuesday of that week. I was happy to get this, but it was not all that I wanted. I had to do a lot of work on this to make it this good- the sky and the foreground are composited. I liked it, don’t get me wrong…. but I knew there was more there.

So I came back Wednesday. I am not EVEN going to show you those pictures. Horrible.

So I came back on Thursday. To my surprise, on Thursday, there were four other photographers there. Everyone was real friendly, and we all started talking. It turns out one of the photographers- Darlene Smith– was also a friend of Ryan Smith (no relation). We all keep shooting as we talk, and all of a sudden the sky went on fire. It lasted maybe 30 seconds, but I knew right then and there that this moment was why I returned to the spot for three days. I could not wait to get home and see how my image REALLY looks (Chimping does not tell the whole story… or even half of the story).

The sky was already there. I did s bit of contrast and saturation adjustments there and the sky was good to go. The only other thing I had to do was remove two objects: Darlene’s car, and a road sign in silhouette up on the road. Then I had my image.

I posted it to Facebook on January 4th. Darlene posted to the picture: “I just remember you saying ‘Dave is very happy’ after you took one. Ha ha! Wet butt/legs was worth it.” I guess I am! On January 8th, the image was chosen as Pictureline‘s Picture of the Day. Then, on February 8th, it took second in the BYU Monte Bean Nature Photography Competition and Exhibition. And now, to named the Grand Winner of the Beautiful Utah Photo Challenge on ViewBug… this picture is one of my new favorites!