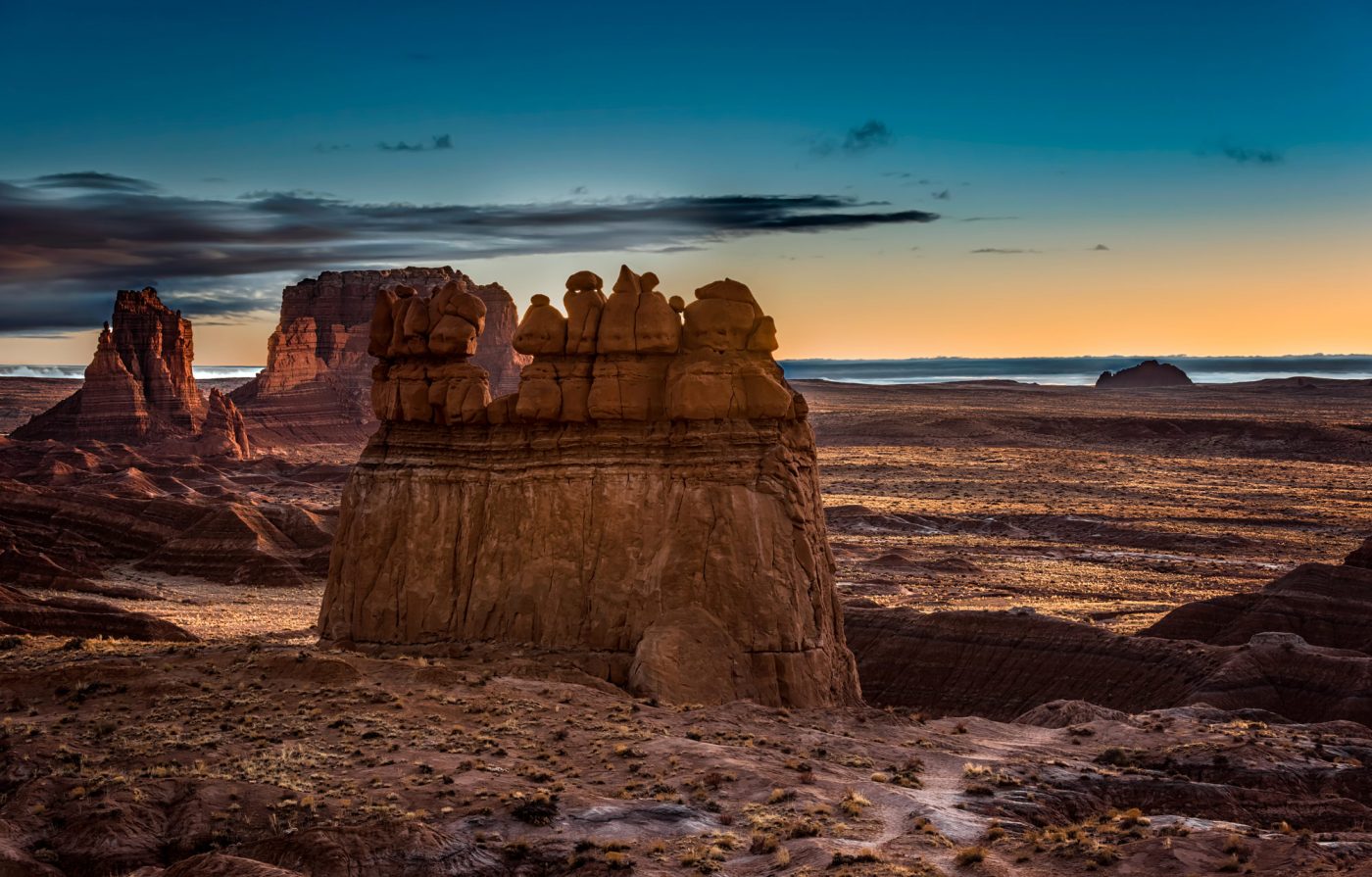 For me, part of the job is getting up at two am to be in place for dawn. Not that I LIKE getting up at 2. And in normal circumstances, it is pretty damn hard to get me up at two. But when I am going to an exotic and beautiful place, as I was on Presidents Day 2017, somehow the pain of an early morning is not quite so bad.

The weekend of February 17-20 2017 should have been great- my daughter was out of school on Friday, and Monday was a holiday: four day weekend. But the weather. Horrible. Clouds, and in many cases, rain. My goal was Goblin Valley State Park. But when I saw that socked in (my mental image was a blazing sunrise above the park), I started looking at my back-ups: Zion… Arches… Escalante… anywhere. All were socked in, being hit by rain or even snow. 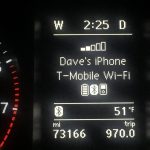 Sunday night, it looks like I am going to catch a break- they sky is opening up! So I hit the sack early and get up at 2 AM and hit the road. Things turn bad at Soldier Summit on Route 6, road from Spanish Fork to Price, Utah. The snow is blowing across the road…. and the road itself is crusted over in ice. There were some serious white-knuckle moments on that part of the trip.

But once I started down the hill into Helper, things picked up. I pretty well flew into Green Valley, where I gassed the car and caffeinated the photographer. I got to Goblin Valley at something like six am. It is totally pitch-black out, and- did I mention- I have never been to this park? So I have no idea where to go to get the view I want.

I pull out the iPhone with the photographer’s ephemeris and plot the sunrise. But I still have no idea what the view before me will be like. So I drive around, and I find a trail called Valley of the Goblins, and that sounds to me like exactly what I want. So I park, load up and set out.

I am walking on the crest of a ridge, and I can see the frost on the ground. Patchy frost- I have never seen anything like it. Then I get unnerved. Someone is watching me. In the early light I see two eyes glowing at me from a hoodoo. I can tell two things: 1) this is not the image I came to capture, and 2) I don’t care. This is SO much better! I set up and start shooting. Lots of brackets because the dynamic range is so great.

I will write a blog post on just this image, so stay tuned. In fact, I think I am going to start doing more in-depth articles on individual images… so look for those coming soon. 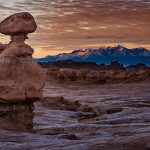 I get back to the lot, and there is a wide expanse of Goblins. Just an awesome sight to see. I walk through, and spend over an hour making images. I saw some of the most unreal things I have ever seen- Goblins smoking as the frost evaporates in the morning sun, and most incredibly, a field of frost that refracted the morning light into a million different colors.

I met a woman who told me about a slot canyon nearby, so I decided to head for that. It was called “Little Wild Horse” canyon, and it is a family-friendly canyon. I ran into a lot of families up there. Definitely worth a couple hours when you go to Goblin Valley.

For the afternoon, I decided to hit Arches National Park. So I spent a couple hours shooting around the Windows Arch area, and did some exploring. I found a couple shots I have always wanted to make.

As sunset approaches, I feel like I need a better view. So I head for Canyonlands NP, and decide to shoot the Green River Overlook. Met a nice man from Washington. The wind was blowing hard. Sunset was a disappointment, except for the view.

When I got home and showed Lisa the images, she was so bummed she could not go. So we headed out the following Sunday at, you guessed it, 2 AM. Again, when we arrived, it was perfectly black. There was no magic frost like the previous weekend, but this morning we had something better: the Milky Way. 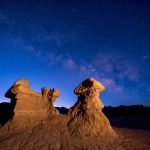 The Milky Way was plainly visible in the Eastern sky. But so was the first hints of dawn. We raced down into the valley to get the goblins with the Milky Way. I was using a new lens that I got on the recommendation of Marc (@TamronRM) the Tamron Rocky Mountain rep. What impressed me was the star images he got with a zoom lens. This was that lens- a 15-30mm ƒ/2.8… with vibration control. What better way to try it out than in this run-and-gun situation?

I was only able to get three images before dawn overtook the stars of the Milky Way. The first was testing exposure (it was over). The second was spot on (see image) and the third was bumped. I would say the lens works as expected. I am quite happy with it- it came through under the gun for me!

We continued to shoot the dawn, and never ran out of beautiful vistas to shoot. We revisited some of the vistas I had shot the previous week, but I did not want to redo what I had already done. I wanted new images. And as hard as I tried, I am not sure if my images can really do justice to the incredible raw beauty of this place. It is so unlike anything you have ever seen, and so unworldly. Especially at 7 am when you wander through by yourself.

Again, as I did the previous week, we headed up the road to BLM land and the Little Wild Horse canyon. We are right at the top of the San Rafael Swell, and the rocks are just thrust up out of the earth. Colors are varied and vibrant- yellows, oranges and reds as you would expect, but also greens and purples. 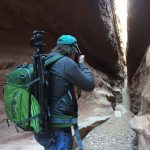 The canyon is a series of slot canyons and wide open spaces. In places, one must walk sideways the slot is so narrow. The walls shoot up hundred of feet, pushing the bottoms of the slots into deep shadows. In places, bright reflections of the sun shoot straight down, allowing for vibrant clashes of color and contrast. Layers line the walls, often plunging at 30 degrees or more beneath the sand at our feet.

We got out of the canyon by noon, and headed south to Hanksville, and then west to Capitol Reef National Park. This was our first visit to that park. Like the rest of Southern Utah, we were not disappointed. It seems like a more personal, more touchable version of Zion National Park. We saw Petroglyphs and Apple Orchards, and cliffs that shot up hundred of feet. The Fremont River was still frozen over in parts. We took the scenic drive, and went in search of the Cassidy Arch, where bandit Butch Cassidy was known to hang out and hide out. 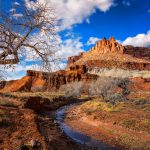 One of the iconic images of the park is a mountain called the Castle above the Visitors Center. I was no less struck by it;s beauty than the thousands of visitors before me. So much so I pulled over, turned around, and make a few images of it. I crept up to get the river ion the foreground. I like it there, but it was not sitting well with me. As we drove away, I saw a point at which the river made a bend, and I knew THAT was what was missing. So we stopped and I went back and shot more. As I walked away, the light turned magic…. so I made one more image. Winner!

By this point we decided the day was already very long, and we had a 4 hour drive home. So we headed out. Near Fish Lake, south of Richfield and Salina, I guess I got on it a bit; one of Utah’s finest decided it was a little too much. Happily, I got off with a warning- Thank you Officer!. Just after we left him, we saw a peregrine falcon sitting on a fence next to the highway. By the time I got a 200mm on the camera and turned around, he was gone.

All in all, two weekends at the Goblin Valley, and I make hundreds of great images- all with my new D810. With the previous weekend excursion to Bryce Canyon with Lisa, now I have shot 4 of the 5 Utah National Parks in just February.  I am excited top get out again with this camera, it is a beast. In the meantime, I will give you some in-depth looks at how and why I shot some of the images on this trip- so stay tuned!