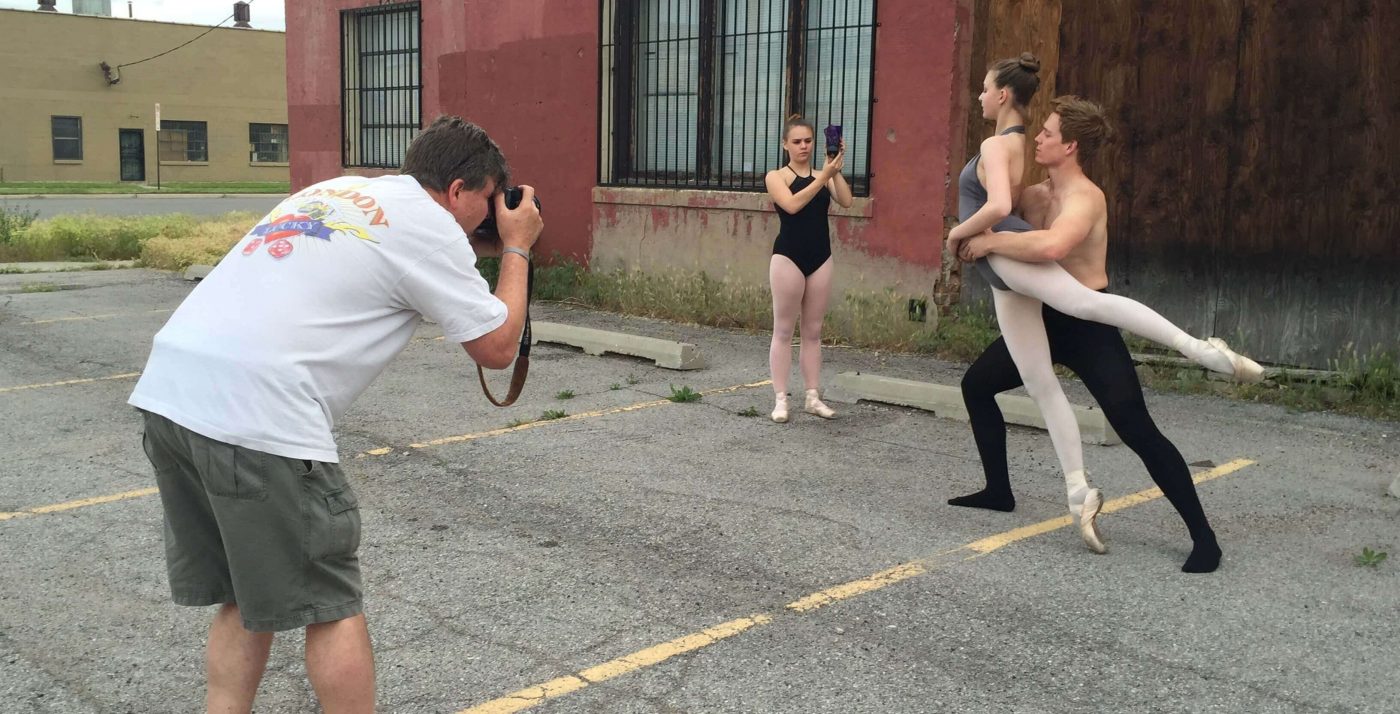 I must say, this was a shoot we were all looking forward to. Cameron had been the prince at my daughters Ballet school for years, and we all loved him. He was a great dancer, but more than that, he was great to work with. But he grew up; got married, and moved away to the big city to make his fortune on Broadway. And then he got pulled back to Salt Berg. I had kept in touch with him, and we both agreed that when he got back, we would do a shoot. There was no shortage of ballerinas who wanted to be on this shoot with him, and we ended up going out with Katie and Tori. 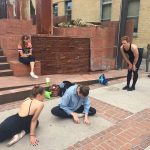 Our first stop was one of my favorite alleys. This was used for one of my favorite pictures of Katie, when we were caught in a downpour. That specific place didn’t seem to work, so we went around the corner to start the shoot. We started with some stretching, and then a simple pose to get it rolling. What I like in lighting is keying into the look, or the eyeline of the principle subject. Shooting off-axis gives a great light fall off, and a look to lighting I like. Depending on the quality of the BG light- harsh, soft, overcast- I may scrim, reflect or otherwise treat the light. This shot was done at about 3 PM, so we had harsh light- so I used the flash full on. I did modify the color of the light, to get a golden look. I chimped, and saw just about what I wanted. Moved the light in more to bring the background down, and I got what I call a “Rembrandt” look… 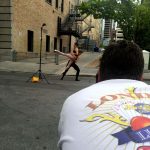 The next set up was just swinging the camera around. I wanted to get a small depth of field shot. I really did not even care much about the background- I just wanted to shoot at f 1.8. We shot a lot here- for maybe a half hour. There were some good pixs,but nothing great. We found a frame of metal, and we got all three models in that- this made a great image. But we felt we had probably shot this area out. We decided to move on to another part of town I had spotted and scouted.

As we left, we found a pretty, flat brick wall. Cameron wanted to do a jump picture here. Always one to try anything, I quickly agreed. So I got down low, and put a wide lens on. I believe Lani was to my right, with an off-camera flash with heavy diffusion. We popped off 3-4 images, and generally liked them. The Cameron said, “Let’s do one more…” We did. That was this one…. perfect! 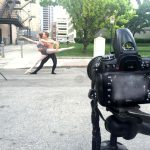 We went to an area with railroad tracks… and shot a lot of lifts. Good images, but nothing that really was awesome. Time was at a premium- did I mention Cameron was on a break between his matinee and his evening performance? So we only had two hours. So we scouted further, and found a nice brick building… this was going to offer us many opportunities! We did a variety of set ups here. All with flashes. 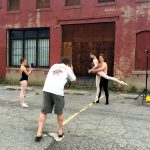 You can see in some of the pictures we gel them. I sometimes gel the flashes for a rim light, or for color. Other times, I will key with a gelled flash, and white balance to that, to get the background to shift colors. I love playing with color. I learned long ago to really pay attention to color temperature. I think I was shooting a Minuteman launch at Vandenburg AFB, and it was running late (as usual!). So I am blowing time with an ABC crew (The NETWORK!!!!), and he clued me in on something VERY important: He NEVER white balances. He just dials in the appropriate filter. But he did not want perfects whites- he wanted to show the QUALITY of the light by how it varied from normal, and he wanted to always show that variation. Its a great way of working, and can give you amazing results, but you have to understand color temperature in Kelvin. And you have to want to play. 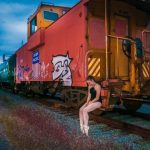 Here is a great example of how I use this, and from this shoot. Cameron had log gone, and we were still out, looking to make images. Its past seven PM, and we are getting near twilight. But rather than using the flash daylight balanced, or even adding blue to match twilight (and LOSING that wonderful color!), I gelled yellow, and color balanced to that. This made the blue in the sky blow up…. and gives a very unique and saturated look.